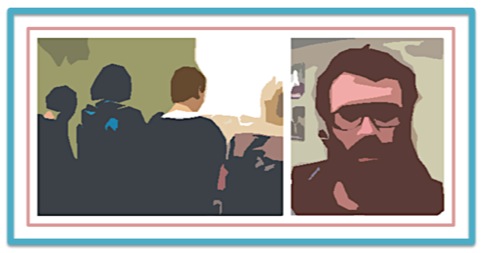 The digital interns engaged in three poetry exercises today in anticipation of creating an online poetry archive. For the last project of the morning, the interns used digital photographs of different locations around Cape Breton University that they had taken the previous day, while learning how to use the photography app of iPads from the Centre for Sound Communities. They then created online graphics, collages, and slideshows on their newly created WordPress websites using their recently acquired skills through WordPress training. The digital interns crafted their own individual poems to express how they felt about the different spaces and using technology to interpret those spaces.

Earlier in the morning the interns discussed how they might create an online poetry archive for a future project, and all of the ways that they could use technology to make that poetry accessible through media. The result was two videos: the first emulating Sachiko Murakami’s own interpretation of Elizabeth Bachinsky’s poem “When I have the Body of a Man”, entitled “When I was a Digital Intern”, and the second a comprehension practice of Christine Leclerc’s 40,000km protest poem which resulted in a piece entitled “Satirical Protest Against MAC Computers . . .” (see videos below).

The digital interns from the Centre for Sound Communities at Cape Breton University mimic Sachiko Murakami’s interpretation of Elizabeth Bachinsky’s poem “When I have the Body of a Man” in preparation for their work in creating an online poetry archive. Titled “When I was a Digital Intern”, the interns stood in a circle reciting the poem they created, filmed in a single take traveling 360 degrees. Therefore, the poem begins and ends with the same person.

The digital interns from the Centre for Sound Communities at Cape Breton University engage in satirical protest against MAC computers as a comprehension practice about Christine LeClerc’s 40,000km protest poem as they prepare to create an online poetry website.