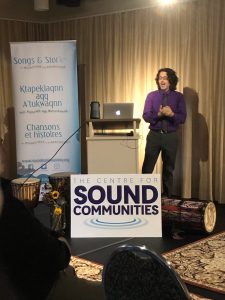 Kaley is Assistant Professor of Music at Lewis & Clark College. Prior to moving to Portland, Oregon, he was Assistant Professor of Music at the University of Chicago. He is the author of the forthcoming book, The Labor of Music: South Indian Performers and Cultural Mobility (Oxford) and a co-editor for the forthcoming volume, Sound Alignments: Popular Music in Asia’s Cold Wars (Duke). His previous research focused on the entrepreneurial, aesthetic, and socio-political work wedding music specialists perform in the diaspora. Mason also recently co-edited a special journal issue on generational friction in musical ethnography of South Asia.

The presentation focused on the relationship between music and food in environmental justice movements in South India.  The first part of the lecture talked generally on the many ways in which music and food connect, overlap, and mutually reinforced a lot of social activities together. He showed us a list of these different gastro-musical intersection.

The second part drew on some examples on how musicians are mobilizing their art and craft to address food security issues and environmental justice in these times of climate crisis.

After the presentation, the audience talked more about the ways food and music connect including hospitality.

In the evening, we had a film screening by Dr. Svanibor Pettan. 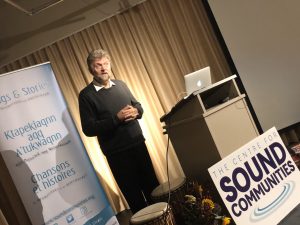 He is professor and chair in ethnomusicology at the University of Ljubljana, Slovenia. His academic degrees are from the universities in Croatia, Slovenia, and the United States, while his fieldwork sites include former Yugoslav lands, Australia, Egypt, Norway, Sri Lanka, Tanzania, and the USA. The prevalent themes in his publications are music, politics and war, minorities, multiculturalism, gender, and applied ethnomusicology. Among his recent publications are the documentary with study-guide Kosovo Through the Eyes of Local Romani (Gypsy) Musicians and three volumes of The Oxford Handbook of Applied Ethnomusicology, which he co-edited with Jeff Todd Titon.

He showed us a film called Tidldibab: The Oldest Flute in Ancient Times and Today. 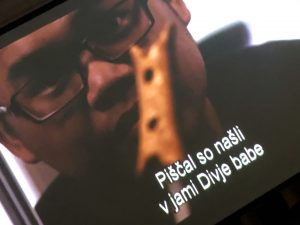 It is about about the archaeological find (in Slovenia, 1995) featuring the 60,000-year-old (contested) Neanderthal flute and the role of a Macedonian musician Ljuben Dimkaroski in this story. 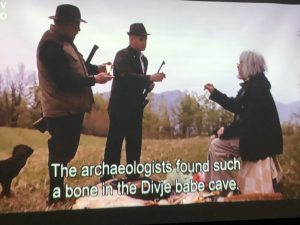 Ljuben, who is the star of this documentary, passed away a couple of years ago. Ljuben and Dr. Svanibor Pettan were friends and collaborators. This film was made by Television Slovenia, the country’s national television station. Darja Korez Korencan wrote the script for the film, and Divja Baba (pseudonym) was the Director. 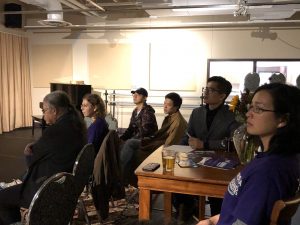