Today was our final day of the Colloquium. We drove back to the Centre for Sound Communities from Chéticamp for our last presentation.

Our final Keynote presenter was Dr. Christina Leza. She is a cultural and linguistic anthropologist whose research interests include indigenous peoples of the Americas, discourse and identity, racial and ethnic discourses, grassroots activism, and cognitive anthropology. Her most recent research has focused on border indigenous activist responses to U.S.-Mexico border policy in collaboration with grassroots indigenous organizers on the U.S. southern border. She has also examined broader discourse patterns among indigenous grassroots activists in the U.S. and Latin America. She is the author of the book Divided Peoples: Policy, Activism and Indigenous Identities on the U.S.-Mexico Border, and a chapter on activism, identity, and hip-hop at U.S.-Mexico border for a volume on Indigenous music and modernity. 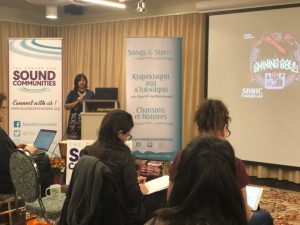 Her presentation was titled Articulating Indigenous Soul in Search of Healing.

She talked about how distinct (and often contested) Indigenous identities in the U.S.-Mexico border region are experienced. She also discussed how these identities are expressed through engagement with sonic articulations of Indigenous roots and colonial oppressions.

She told us how this work emerged from field research with Native and Mexica activists in the Tucson/Phoenix, Arizona region. Drawing from field observations, interviews, analysis of song tracks and videos by selected conscious hip hop artists, she examined how individuals and groups in the U.S.-Mexico borderlands perform indigeneities in the context of historical conflicts between Native Americans and Chicanos over claims of indigeneity. 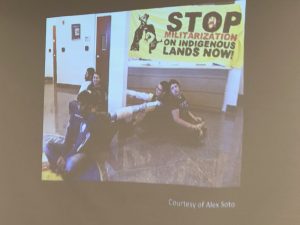 Her presentation built on Alejandro Nava’s exploration of hip hop as a search for the soul. Her presentation considered how Indigenous artists of distinct cultural ancestries sonically articulate Indigenous soul through the select use of ancestral musical traditions and Indigenous protest references.

She described how both Shining Soul and Aztlan Underground emphasize healing as a central goal of their sounds. They embrace music as ceremony, medicine, and a source of healing. Yet, she explained that through their musical sound production, both bands communicate their positions as oppressed and “conflicted moderns.”

She played us the songs “Get Up,” “No Mercy,” by Shining Soul and “Decolonize,” “My Blood is Red,” and “Indigenous” by Aztlan Underground. She explained how in these examples, they are simultaneously producing “frequencies of healing” and frequencies of violence in protest against historical and contemporary forms of colonial oppression. Ultimately, both bands communicate the predicament of Indigenous peoples who must constantly work to heal under the onslaught of settler colonial violence. 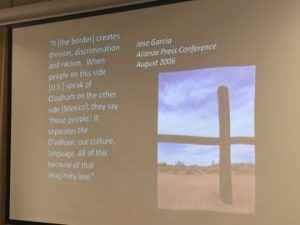 She concluded by showing us how the search for healing may be particularly challenging for Indigenous peoples with a migration lineage shaped by the imposition of international borders and forced relocation.

We ended the 26th ICTM Colloquium with a publication workshop. This workshop was filled with productive brainstorms of how to turn the discussions we heard over the past few days into published material. Our conversations were guided by Christina Leza’s final presentation slide with a quote from Shining Soul, noted below. This message resonated with our experiences at this Colloquium and we hope that it will reverberate throughout our publication. 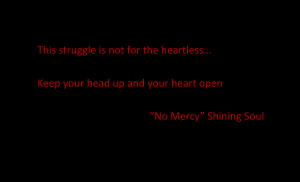