Today marked the first official day of the 26th International Council for Traditional Music Colloquium. We spent the day at Membertou Heritage Park. Our discussions started with acknowledging the land on which our Colloquium took place: Mi’kma’ki — the unceded territory of the Mi’kmaq. We talked about the history of Membertou, and also more broadly about the history between Canada and Indigenous peoples, noting that there is significant work still to done. 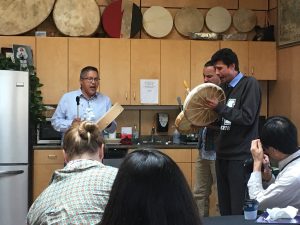 We were honoured to have started our day by listening to the singing and drumming of Graham Marshall, David Meuse, and Bill Meuse. We thank them for sharing these songs and stories with us.

We were welcomed by Vice President Academic and Provost at Cape Breton University, Richard MacKinnon. 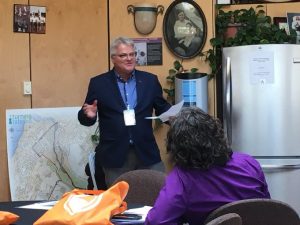 Svanibor Pettan also welcomed us on behalf of the ICTM and gave us an overview of the organization’s mandates. 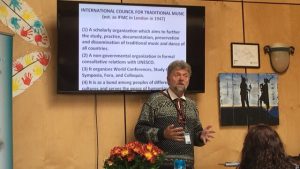 We  then heard from Graham Marshall, who gave a presentation called Wula Na Kinu: This Is Who We Are. Graham was born and grew up in Membertou First Nation. He speaks and sings Mi’kmaq, and is a founding member of the Sons of Membertou. The group’s first album (1995) was nominated at the East Coast Music Awards, and they performed at the Halifax G7 that same year. He recently established another drum group, The Kun’tewiktuk Singers. Marshall worked with Mi’kmaq Family and Children’s Services for more than ten years and developed a mentorship program, in which older youth are paired with younger children to provide support through traditional practices. He is dedicated to continuing Mi’kmaq culture through the practice of singing, drumming, and other traditional knowledge, and to passing these traditions and knowledge to the next generation.

As a Membertou Council Member, Graham is active in the development and actualization of Indigenous policies and governance, and in implementing the recommendations of the Truth and Reconciliation Commission. He serves on the Council’s Executive, focusing on community and cultural development, including Indigenous tourism. Graham told us about migration and encounter particularly with stories from his own life and experience. He also introduced us to the Kun’tewiktuk play that was created through Membertou’s collaboration in an earlier research-creation project phase with Marcia Ostashewski and the Centre for Sound Communities research team. Kun’tewiktuk tells the story of the forced relocation of the Kings Road Reserve community to its current Membertou location.

Next, we had our first keynote presentation from Tina K. Ramnarine. She is Professor of music at the Royal Holloway University of London and a musician, anthropologist and global cultural explorer. Her research focuses on music in global histories, cultural heritages and identity politics, as well as arts responses to contemporary global challenges. She has carried out extensive research across the Nordic countries, especially on Finnish and Saami music. She has worked on Caribbean music, labour histories in the Indian Diaspora, and intercultural gamelan projects in Bali. Her latest publications include the edited volumes Global Perspectives on Orchestras: Collective Creativity and Social Agency, We Mark Your Memory: Writings from the Descendants of Indenture, and Dance, Music and and Cultures of Decolonisation in the Indian Diaspora. She has broad interests in transnationalism, decolonizing scholarship and postcolonial studies.

Her talk was titled Reclaiming Indigenous Cultural Heritage in an Island of Multiple Diasporas. Looking at the island of Trinidad, she notes that until until recently, Trinidad’s Indigenous communities were mostly invisible. In the last couple of decades they have become increasingly politically active and hence visible.

Her presentation discussed reclamations of Indigenous cultural heritage in an island of multiple diasporas. Looking to music, she showed examples of parang and to the changing politics around this genre. Her discussion draws on literary insights from Wilson Harris’s The Ghost of Memory, particularly the questions he poses in relation to new histories of Indigeneity: “What is spirit? What is the New World? What is art? What is truth?”

Through her discussion of parang and sites like Pitch Lake, Tina examined how heritage sites and cultural heritage practices are dimensions of the recuperative imaginaries of the arts, overlapping with diasporic cultural histories of African enslavement and Asian indenture. She suggests that in this context, Trinidad becomes a laboratory for examining the dynamics of migration and encounter between ‘Indigenous’ and ‘diasporic’, as well as reclamations of cultural heritage across both identity categories. 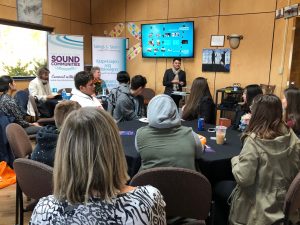 Dr. Alex E. Chávez gave a public lecture and demonstration about Sonic Bridges: Home, Intimacy, and the Borderlands. He is the Nancy O’Neill Assistant Professor of Anthropology at the University of Notre Dame, where he is also a faculty fellow of the Institute for Latino Studies. Dr. Chávez’s research and teaching explore Latina/o/x expressive culture in everyday life as it manifests through sound, language, and performance. He has published in various academic journals, contributed to numerous prominent volumes, and his writing has been featured in public venues such as the Huffington Post and Revista Contratiempo. His book Sounds of Crossing: Music, Migration, and the Aural Poetics of Huapango Arribeño has won many awards, including the Alan Merriam Prize from the Society for Ethnomusicology. He has consistently crossed the boundary between performer and ethnographer in the realms of both academic research and publicly engaged work as an artist and producer. 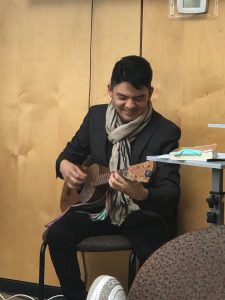 An accomplished musician and multi-instrumentalist, Chávez has recorded and toured with his own music projects, composed documentary scores (most recently Emmy Award-winning El Despertar), and collaborated with Grammy Award-winning artists. In 2016, he produced the Smithsonian Folkways album Serrano de Corazón. 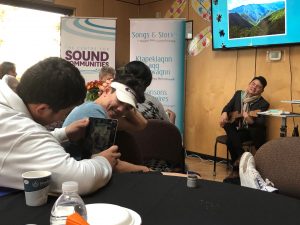 Alex introduced us to huapango arribeño, a musical genre originating from north-central Mexico. A musician himself, Chávez has placed sound at the centre of his artistic practice, scholarship, and publicly engaged work. In this presentation, he discussed how the musico-poetic design and performance of huapango arribeño produce shared sentiments of intimacy, conviviality, and companionship. He also shared his own stories about how he has brought these insights in both his academic and creative work as a means of hearing across multiple types of borders.

Alex ended his presentation with a performance of one of his own songs.

We ended the evening with a public event by Dr. Afua Cooper. She is a senior academic trained in the history of Black people in Canada, and the African Diaspora. Her book on Canadian slavery broke new ground in the study of Canadian and Atlantic slavery and it was nominated for a Governor-General’s award, and named by the CBC as one of the best books published in Canada. A recognized poet, spoken word artist, and wordsmaestra, Afua helped found the Dub Poetry movement in Canada and organized five international Dub Poetry festivals in Canada, in addition to publishing five books of poetry and recording two poetry CDs. In recognition of her poetry she was installed in 2018 as Halifax Region’s Poet Laureate. An academic leader, Afua founded the Black Canadian Studies Association, the Dalhousie Black Faculty and Staff Caucus, and she established the Black and African Diaspora Studies Minor at Dalhousie. Her awards and achievements include: the Ontario Black History Society Daniel G. Hill Community Service Award (2019); Canadian Trailblazers Award, Historica Canada Recognition (2017); a SSHRC Scholar of Honour feature (2017); Nova Scotia Human Rights Award (2015). The impulse behind the work of this multi-disciplinary scholar/artist is democratic. She aims to bridge the gap between academe and the world at large. 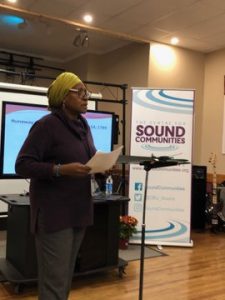 Her presentation was entitled Fugitive Verses/Sonic Stories: Slavery, the Middle Passage, and the Soundscapes of Black People’s Freedom Quest. 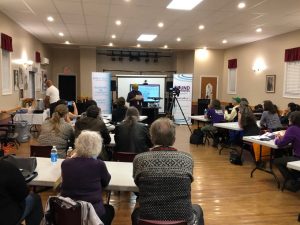 Through a series of poetic performances, she drew on history, poetry, memory, literary archaeology, slave narratives, petitions, advertisements for runaway slave, and sale of slaves, Negro Spirituals, and dub poetry–all to tell a sonic story of the awfulness, the brilliance, the pain and anguish, and the resilience that are part and parcel of Black people’s 500-year migratory journey within Canada and the African Diaspora. From Cape Breton in the North Atlantic to the Niagara Peninsula in the south, to Victoria in the West, “Fugitive Verses” sings the Black Atlantic. Afua opened with a moving performance of The Child is Alive.

She told stories about historic figures like John Ware and Richard Pierpoint. We heard about migrations across the Atlantic in 15 Ships and about the Caribbean in Ra Ra. She also shared some very local stories in the poem Shots Rang Out On My Street Today, in conversation with the recently released Halifax Street Checks Report.

Afterwards, the audience discussed how poetry and performance as means of mobilizing public-facing scholarship, which Afua noted was one of the major successes of the recent project blackhalifax.com. 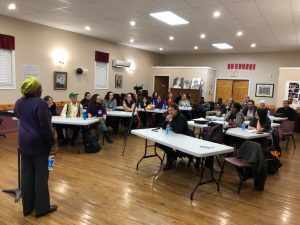