The CSTM/SCTM was formed to serve musicians and their audiences, professors and students, community knowledge-holders and the public. Our conference — free this year! — places you in proximity to listening sessions, workshops on decolonization, a virtual house concert, and our members’ most recent scholarship. Welcome!
DETAILS IN POSTER, BELOW; REGISTRATION LINKS FOR INDIVIDUAL EVENTS AS FOLLOWS:

(1) Paper Panels:Register for Saturday, Nov 27, 2021 11:00 AM in Eastern Time (US and Canada): https://ualberta-ca.zoom.us/meeting/register/tJwof-ytqDkpG9K7L1sEbvcKfkMSYwbxtSL8

Register for Sunday, Nov 28, 2021 11:00 AM in Eastern Time (US and Canada): https://ualberta-ca.zoom.us/meeting/register/tJwvdeivpzgpHtQlMbMORXbkd2oIZucbCg78

Register for CER roundtable for Monday, Nov 22, 2021 02:30 PM in Eastern Time (US and Canada): https://ualberta-ca.zoom.us/meeting/register/tJcpcOqhrzMoHNbPObrOVScvOtXdOmOuygd6

Register for Wednesday, Nov 25, 2021 06:30 PM in Eastern Time (US and Canada): https://ualberta-ca.zoom.us/meeting/register/tJwuc-iupzMrGNMDEz9gg8D43oysrZgFJtrO

Register here for Friday, Nov 26, 2021 03:00 PM in Eastern Time (US and Canada): https://ualberta-ca.zoom.us/meeting/register/tJ0kcOCgpjIiE9POlz0sy7h5AVeU1ba2Jcqh

Register here for Thursday, Nov 25, 2021 06:30 PM in Pacific Time (US and Canada): https://ualberta-ca.zoom.us/meeting/register/tJ0ldO-pqDwiGNwrETuhYfDoK6RirGv9CO5f

Register here for Monday, Nov 22, 2021 06:30 PM in Eastern Time (US and Canada): https://ualberta-ca.zoom.us/meeting/register/tJwvc-yvrj8iGtJu7t63XsC5DjPv0JLiSFv-

– Starting with the Syllabus (Day Two)

Register for Translations Roundtable for Sunday, Nov 21, 2021 06:00 PM in Eastern Time (US and Canada): https://us06web.zoom.us/meeting/register/tZUtduutqzgqE9WdXpx-KzymaGjj1MpRCFdV 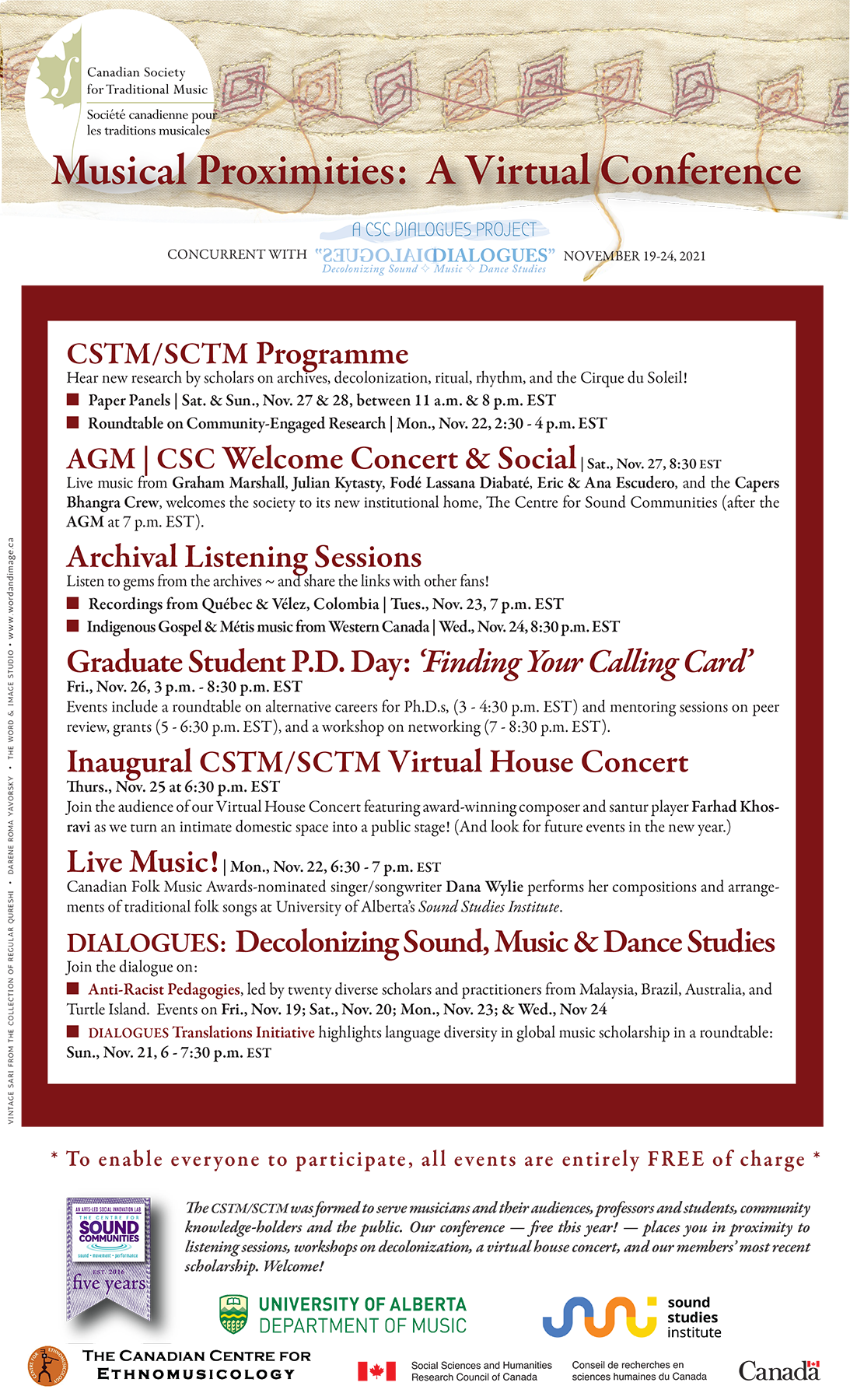 We are happy to announce a series of DIALOGUES events occurring in tandem with the annual CSTM/SCTM Conference, which will be hosted virtually through the University of Alberta (Nov. 19-28, 2021). In this series, we will be presenting four ‘Anti-Racist Pedagogies’ roundtable workshops with knowledge-holders, international scholars, and arts practitioners on the following dates (with registration links): 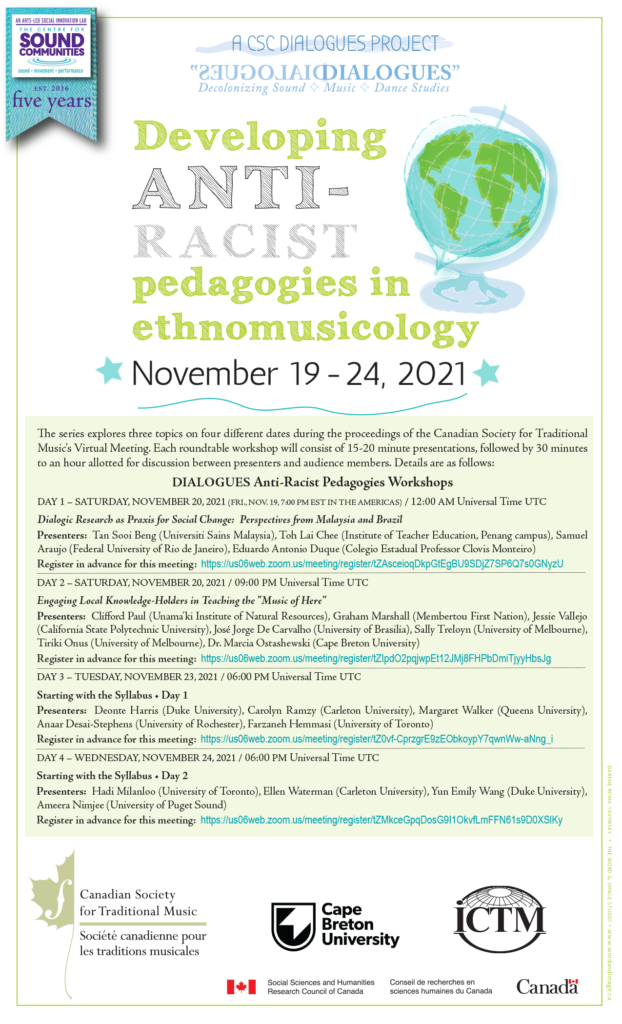 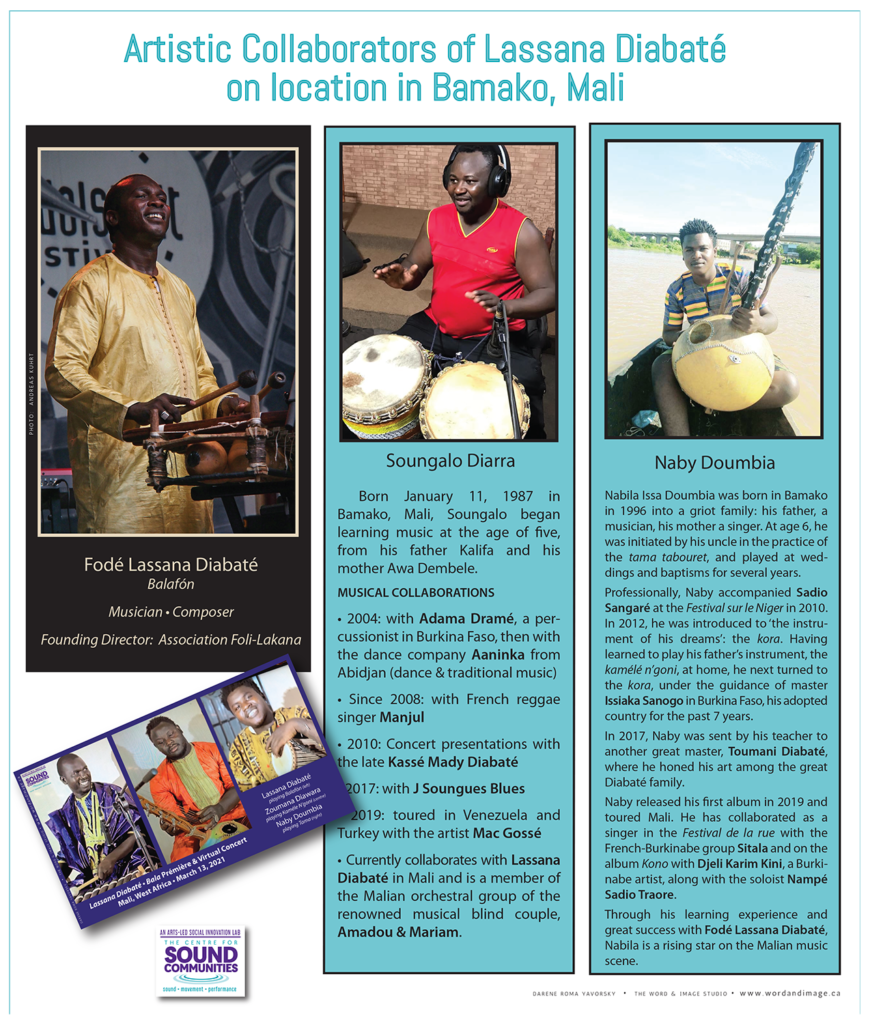 The Centre for Sound Communities congratulates Dr. Sheila Christie on her recent appointment as Chair of the Department of Literature, Folklore and The Arts, and we also thank her for her many contributions to the CSC as she leaves the post of Associate Director. Dr. Christie has exerted truly magnanimous effort in support of faculty and student researchers. She operates on the basis of scholarship and a teaching practice based on care; her thoughtful, dedicated service to the CSC, CBU and wider communities is greatly appreciated by many, as is her commitment and drive, and her impressive ability to get things done. We wish her well in her next chapter! 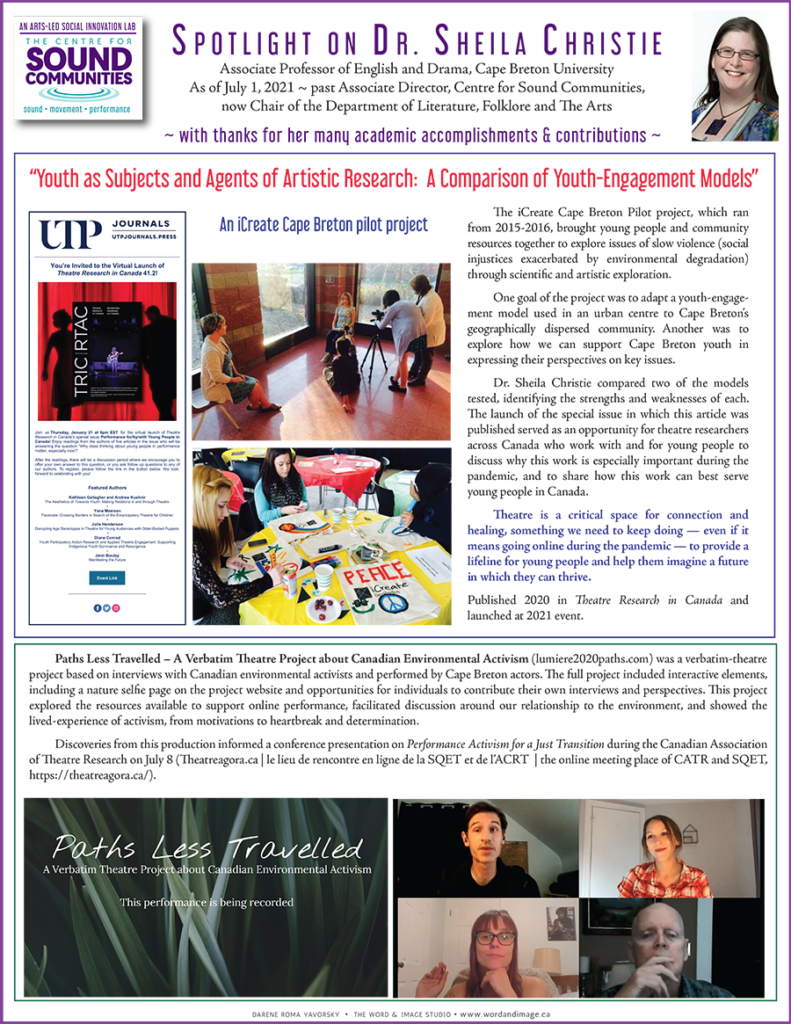 Comments Off on Spotlight on Dr. Sheila Christie 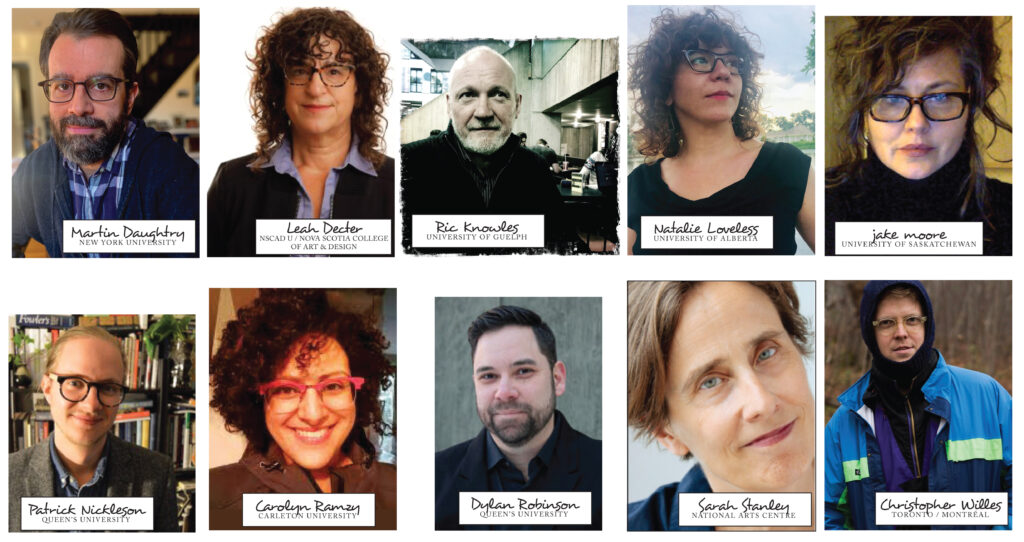 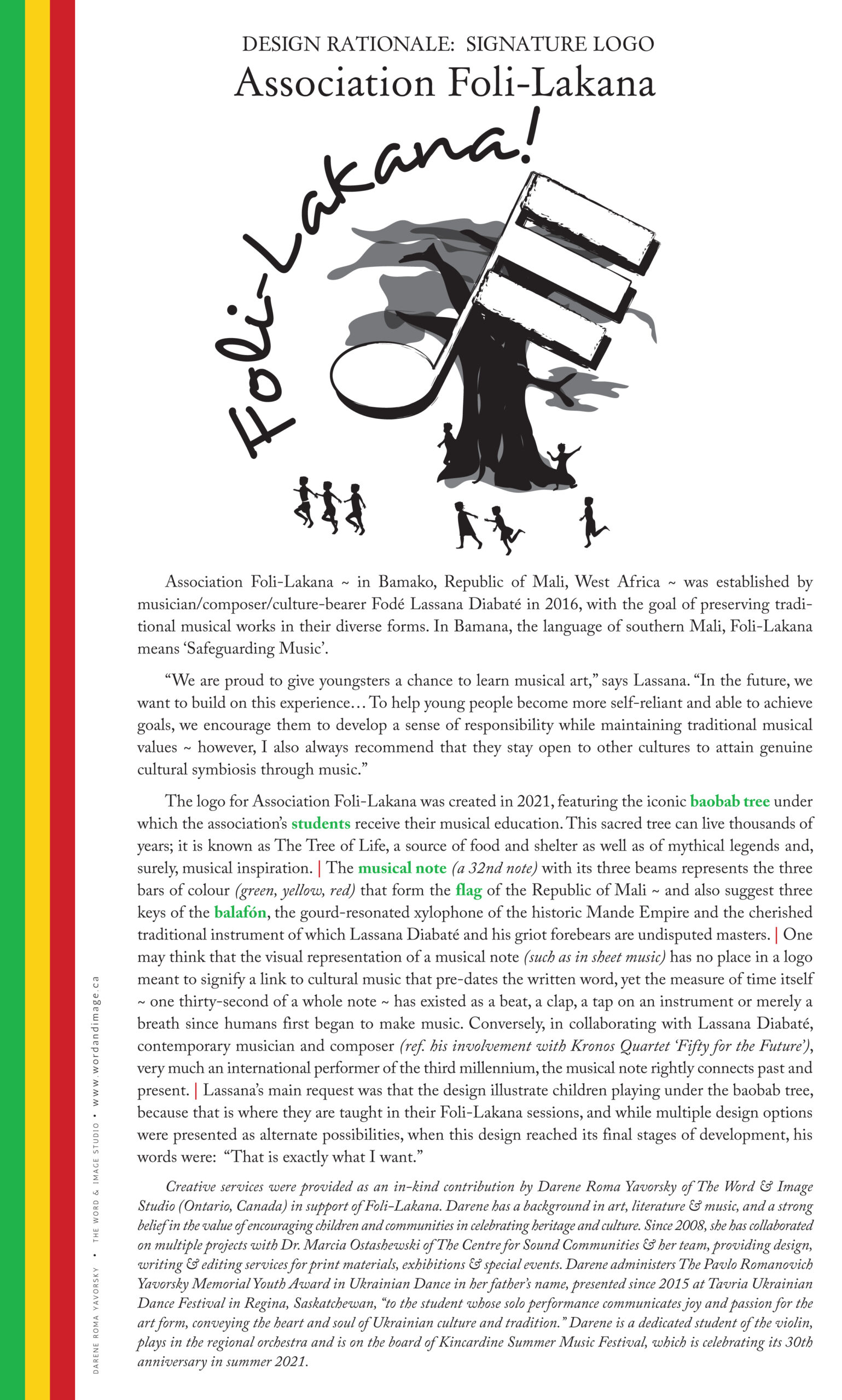 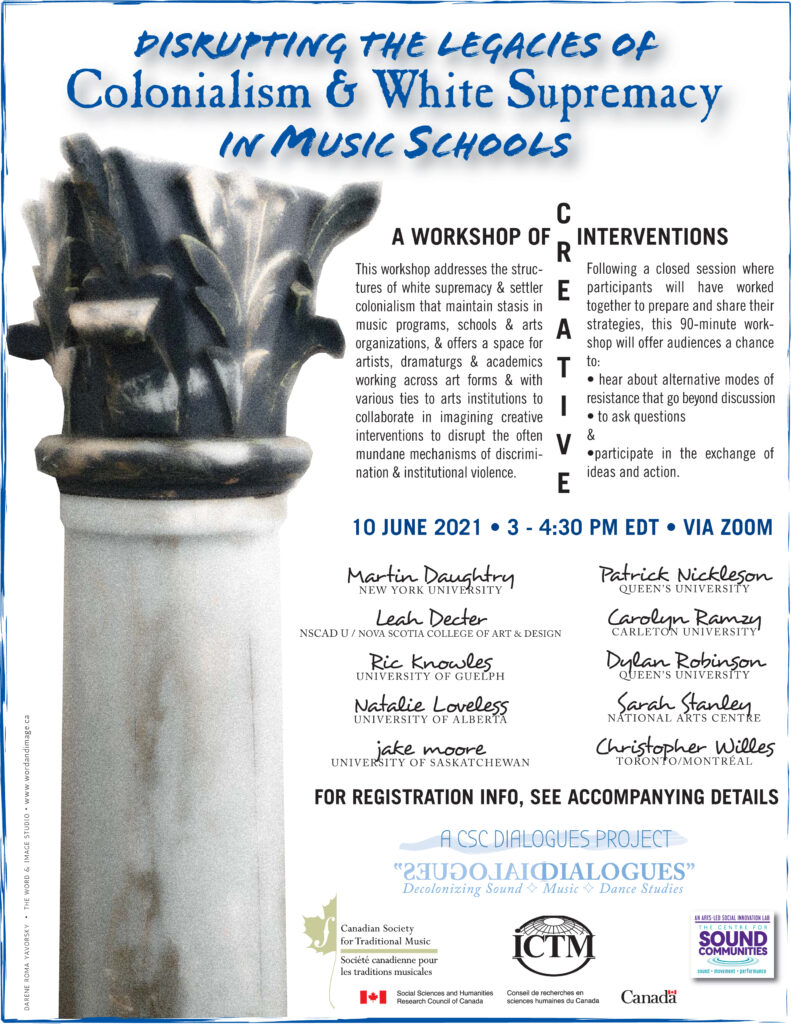 Comments Off on June 10/21 DIALOGUES Workshop 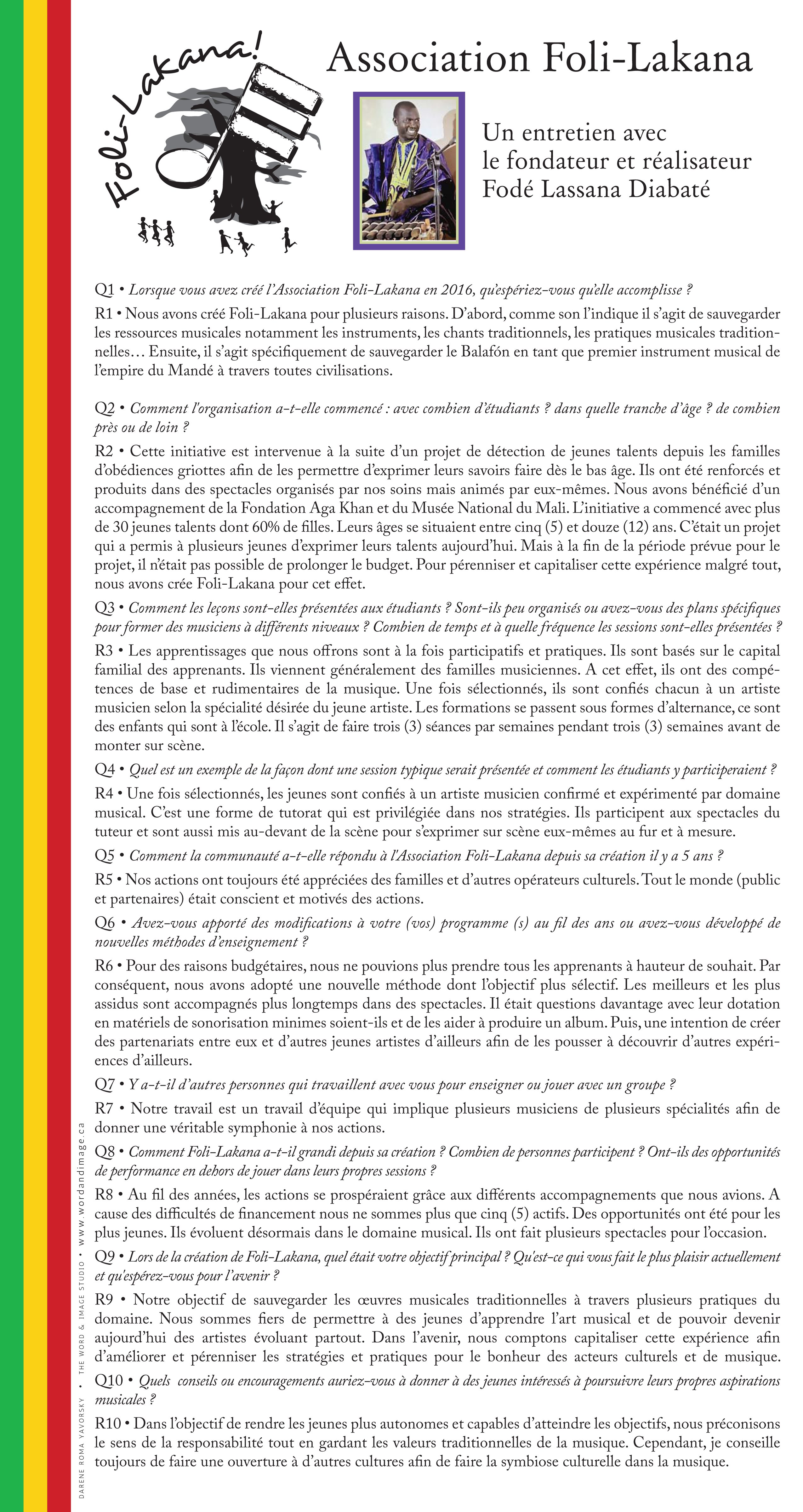 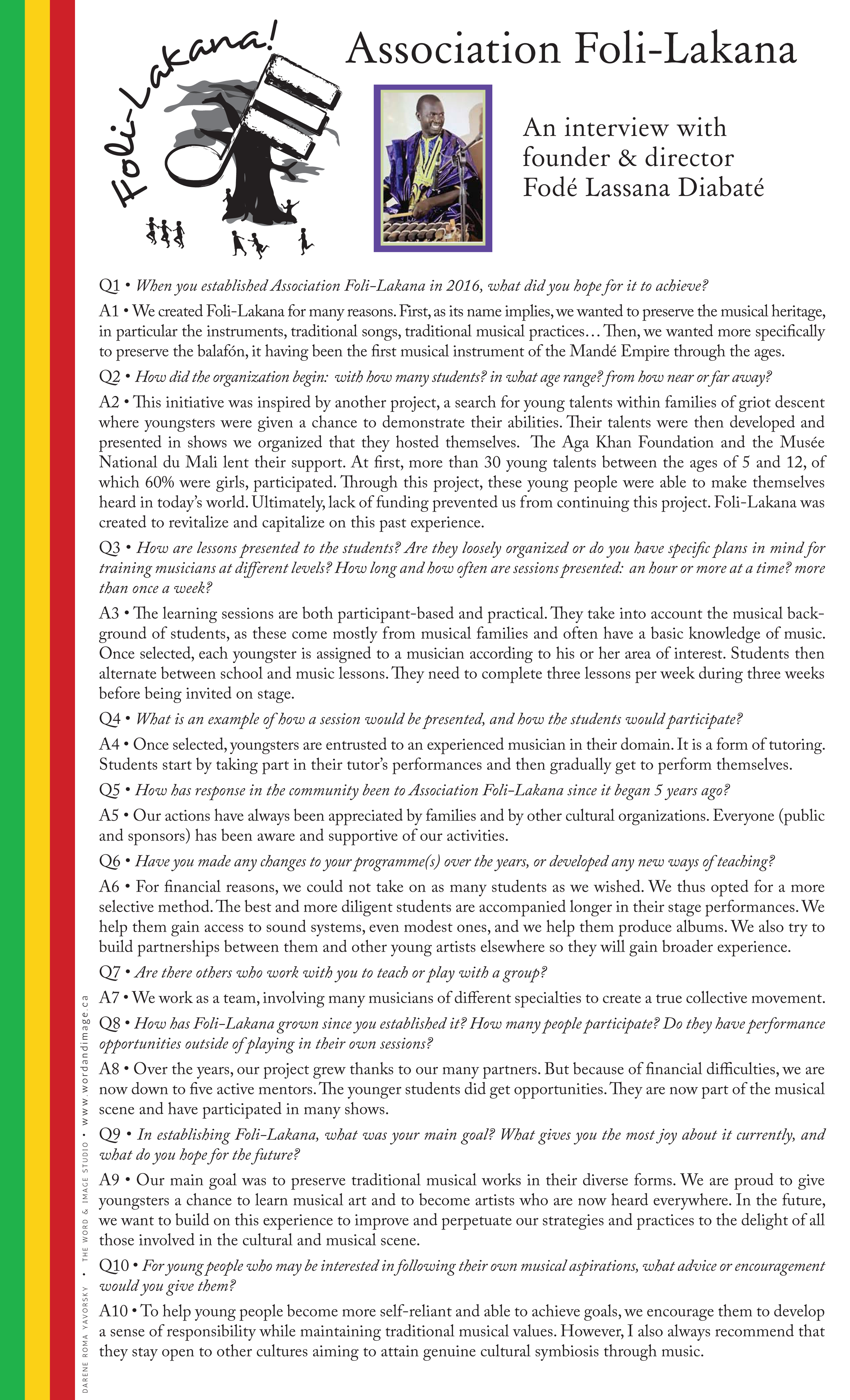 Comments Off on 10 Q&A with Lassana Diabaté

Want to make a short film in 2 weeks? Register NOW:  course starts May 10! 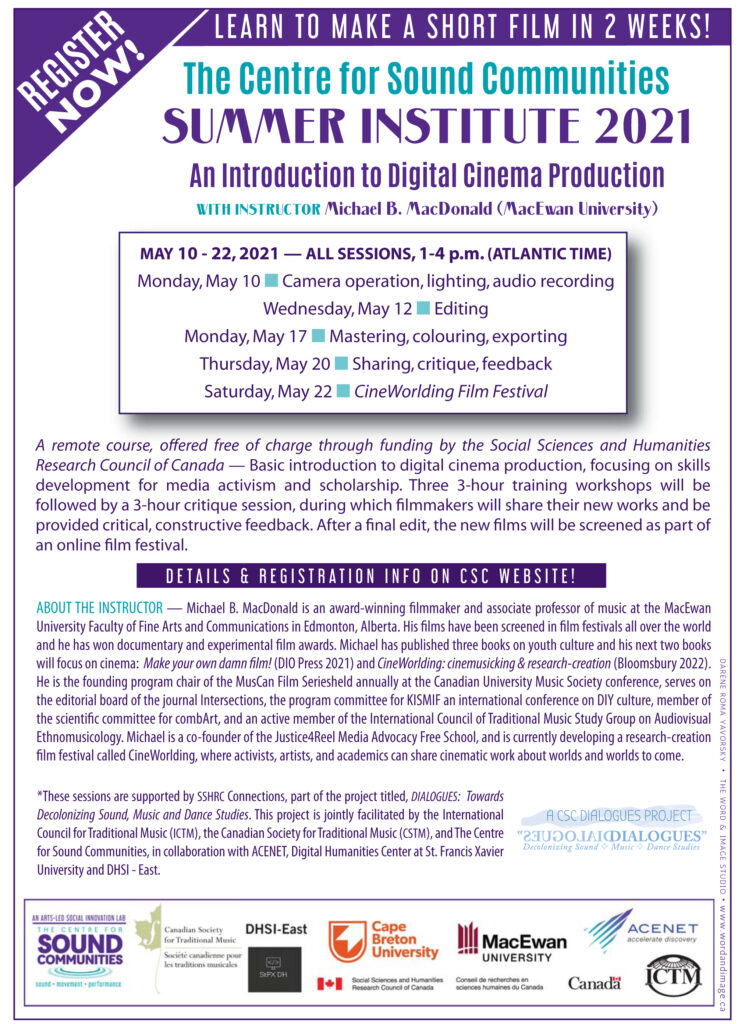 Comments Off on Want to make a short film in 2 weeks?
Scroll To Top