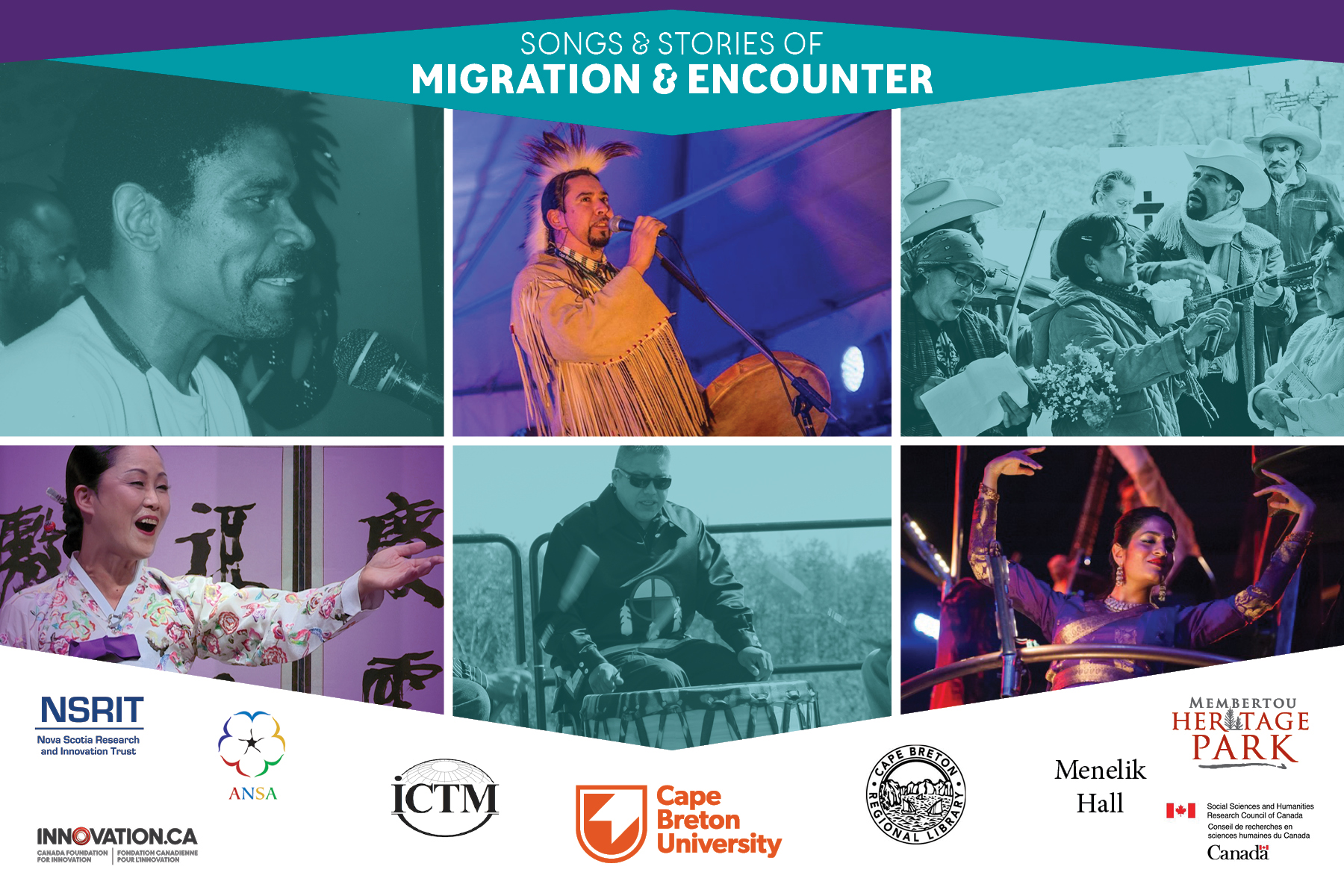 A colloquium for the International Council for Traditional Music (ICTM) hosted by The Centre for Sound Communities, Cape Breton University, October 6-12, 2019.

Following the theme ‘Songs and Stories of Migration and Encounter,’ 18 international scholars share their research on this theme and create dialogue among specialists from all over the world. This colloquium brings together artists, scholars, and community leaders from throughout Canada and the United States as well as the United Kingdom, Japan, Armenia, Austria, and Slovenia.

The following events are open to the general public:

Film Screening: Terada Yoshitaka – Drumming out a Message: Eisa and the Okinawan Diaspora in Japan 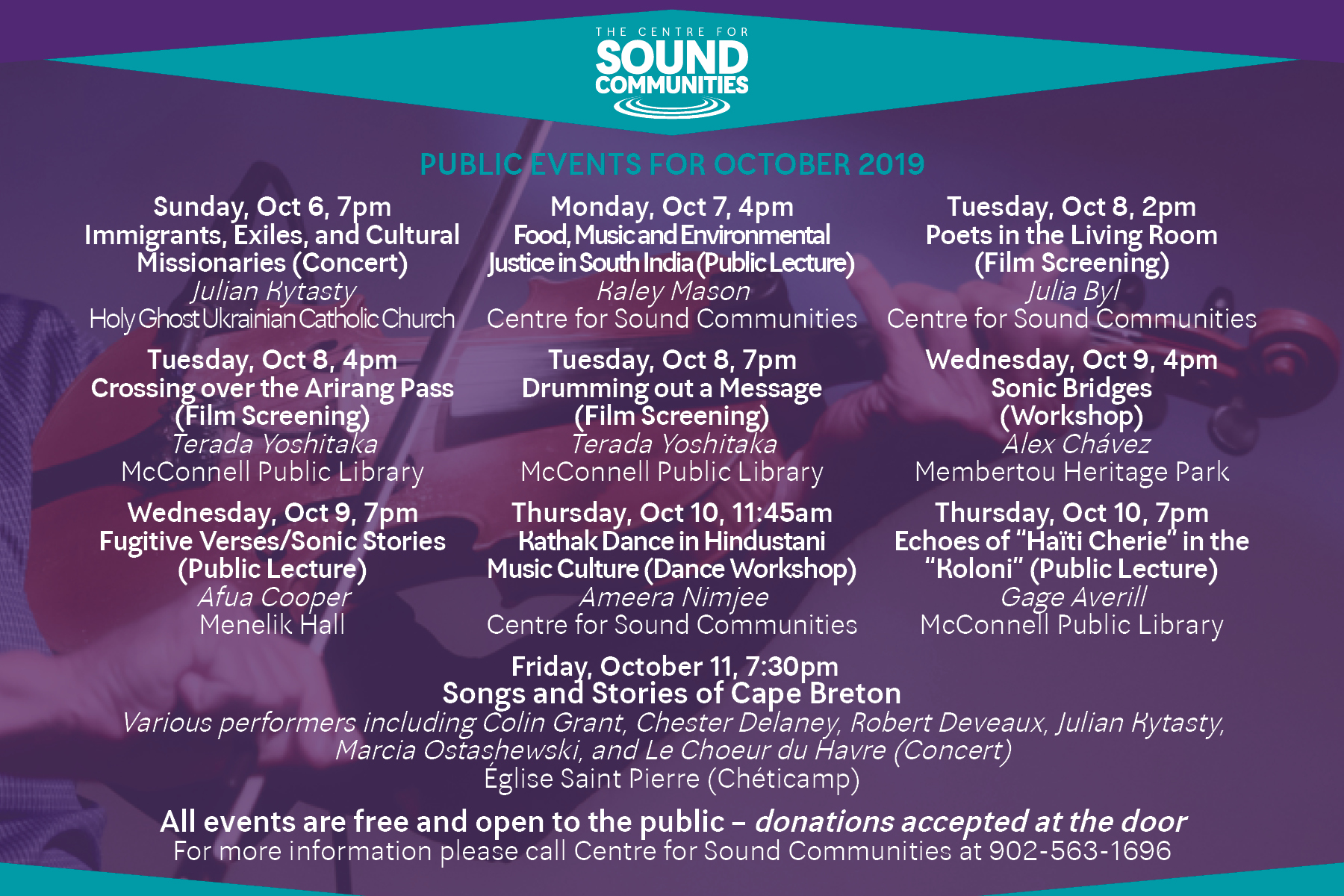 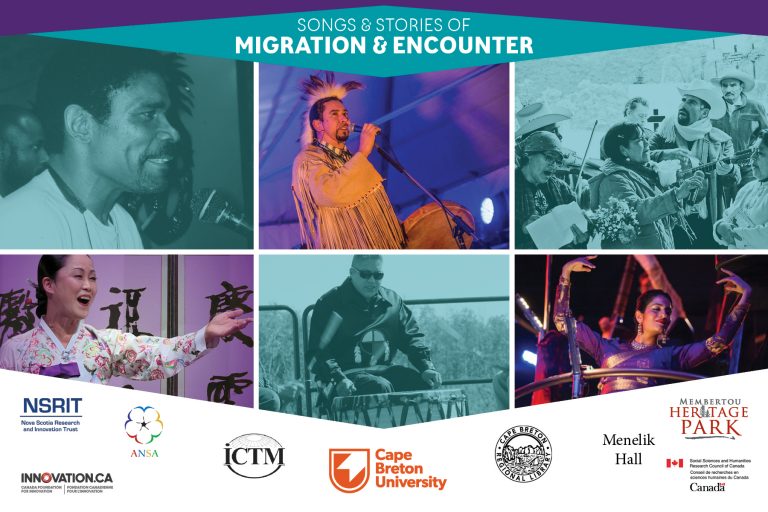 In the 2019 Indigenous theatre research-creation project, Kun’tewiktuk, facilitated in partnership with The Centre for Sound Communities, Membertou First Nation collaborative researchers investigated personal experiences, histories and legacies of migration and encounter in Cape Breton through a theatrical production and film presentation. Subsequent publications in 2020 further explored the significance of the 1916 forced relocation of the Mi’kmaq and its historic and personal consequences on the Membertou First Nation community.

“[What Kun’tewiktuk] meant to the community is that … we were able to open a door into history and to show the people … how it was back in the early 1900s … It was a very significant and traumatic time,” — Graham Marshall, Councillor, Membertou First Nation, Traditional Knowledge-holder, Kun’tewiktuk Project

In this film, Membertou First Nation collaborative researchers speak about their participation in the Kun’tewiktuk Project:

Ostashewski, Marcia, and Shaylene Johnson. 2020. “Relocation, Research and Reconciliation in Unama’ki.” In My Body Was Left on the Street: Music Education and Displacement, edited by Kính T. Vu and André de Quadros, 267–280. Rotterdam: Sense Publishers.

Week four of the Songs and Stories of Migration and Encounter brought around the start of constructing the musical creations the youth have envisioned. Ons brought in a mobile music studio that allowed the youth to record their voices and instrumentals on a multitrack software, getting the feel of how they wanted their performances to sound.

In Menelik Hall we set up various instruments and a vocal microphone. The youth started by using the mobile recording studio to create a hip-hop beat using a small mini keyboard. Next, one of our participants recorded some piano progressions, and the first bits of vocals were recorded. These vocals were mostly rap lyrics created by two other youth participants. Reverend Phyllis generously offered to return this week and help the youth to create lyrics that conveyed meaning to them. By the end of the session we had accomplished a rough version of the song that everyone was extremely happy with.

At Étoile de l’Acadie the youth are starting to get very excited with the idea of performing on stage! Adding to that excitement Todd Hiscock and the Boardmore Theatre have graciously offered the use of costumes and props to the students for the October 22 performance, ‘All My Relations.’  The participants have the scene set for their final performance. The performance will include two songs performed by a pipe and drum duo and 2 participants acting in the background. For their second act they will perform the song they created and Centre Director Lisa Berthier has offered to record her voice for a piece of the song.

The Membertou workshop began with a special indigenous ceremony with Shirley Christmas. The youth and facilitators all appreciated being able to take part in such a honourable ceremony.  Following the ceremony we had a jam session with the hand drum, piano, ukulele, small percussions and vocals. This energetic jam session helped us to work out a melody and chords for a chorus. Once that was down we recorded each individual instrument and voice. By the end of the workshop there were more lyrics written down for the choruses we had left.

The workshops this week were extremely productive!  The youth are getting more and more excited to perform on October 22  and are getting closer and closer to completing their creative pieces. It’s an amazing experience to be able witness the passion and ideas each individual brings to these workshops. Both the participants and facilitators cannot wait to see what the remaining workshops and final showcase will bring.

Comments Off on Week Four

It was during the third week of the Songs and Stories of Migration and Encounter workshops that the participants fully dove into the creative process. With reflections on the words and ideas shared during the first two weeks the youth were inspired to begin brainstorming and creating their piece for the final performance on October 22.

In Menelik Hall, the facilitator Ons Barnat set up the musical instruments to let the youth practice and play with. They chose some popular songs to jam to, getting them into the rhythm and mindset of creative ideas. We welcomed back Reverend Phyllis who shared more stories of her life and experiences in Whitney Pier. She brought with her a Speech Stick – which brought everyone together to share wonderful thoughts about the people in their lives that they love and have influenced them.

In Cheticamp we had the amazing opportunity to sit down and have an interview with Myron Sims, a community elder from Cheticamp. Myron talked about his experience as a Chogyam Trunpa disciple in the 1970’s. Myron also showed us his piano playing skills, which developed from a long time love of Jazz and RNB music.

This week at Étoile de l’Acadie we had the opportunity to work in their beautiful music room. The youth had decided they wanted to create a song as their final showpiece. With that they started the initial steps to writing a song: creating a beat. This beat was created by one of our youth step dancers.  With that beat we recorded the first round of lyrics, focusing of the proudness of being a francophone from Cape Breton Island.

In Membertou we welcomed to new indigenous elders:  Jane and Clifford. They both had amazing and animated stories to share. Both Jane and Clifford were so excited to have the opportunity to chat and share with the youth, encouraging them to create some lyrics. By the end of our session the youth had written down some possible lyrics that were directly inspired by the elders.

This week really demonstrated the inspiration that comes from talking and learning from our elders.  It led the youth to develop their own stories and share feelings that can be expressed in their creative showcase. Everyone is looking forward to seeing what the following workshops will bring, and will continue building on what they’ve accomplished so far.

Comments Off on Week Three

For the second week of the Songs and Stories of Migration and Encounter workshops we were excited to have Dr. Heather Fitzsimmons-Frey visiting from Toronto. Dr. Fitzsimmons- Frey is a Banting Post- Doctoral Fellow at York University. Heathers research is focused towards performance histories, dance, gender and youth. Her expertise helped us connect the youth through choreograph exercises and facilitate the elder talks throughout the week. Dr. Fitzsimmons-Frey joined us for each workshop.

In Menelik Hall the youth welcomed two university students from CBU’s Applied Theatre program, who will be joining them for the remainder of the workshops. The workshop content consisted of some theatre and movement exercises and some fantastic conversation with four elders from the community.

The Workshop in Cheticamp was set up on the main stage of the Theatre of the Conseil des Arts de Chéticamp to focus on choreographic experimentations. Co-facilitator Thomas Colford had the youth mixing acadian step dancing with body percussions. Instead of an elder talk this week, we had the honour of listening to the legendary Acadian musical and theatre author Paul Gallant perform. By the end of the workshop Paul very generously offered to help out in our next workshops playing the guitar.

On Thursday at Étoile de l’Acadie French participants were fortunate enough to have the opportunity to listen to the Centre’s director Lisa Berthier. Lisa spoke about her own migration experiences in Canada.

In Membertou participants and facilitators gathered in the Elders room along with three CBU students from the applied theatre program and indigenous elder, Jeff Ward – who is the General Manager of the Heritage Park. During the initial talking circle the elders told stories and shared their knowledge with us. Following the chat, Heather and Thomas led some activities to help everyone to get to know each other better. Ending the workshop, we did our first music jam session where we sang songs, danced and had an all-around good time.

This second week of workshops was full of amazing stories and ideas. We heard many local stories about migrating to Canada and shared in the wisdom of our elders that will help build the structure of our performance pieces. The youth also got their first taste of the creative process that they will pursue in the coming weeks of workshops.

Comments Off on Week Two 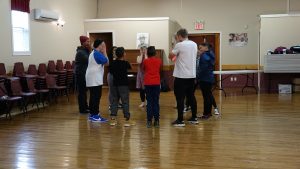 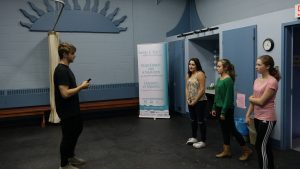 Comments Off on Week One
Scroll To Top