Today’s events began with a film screening at the Centre for Sound Communities by
Dr. Julia Byl, Assistant Professor in ethnomusicology at the University of Alberta. 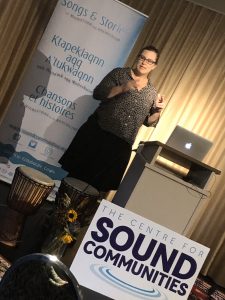 Julia’s current research focuses on archival work on music and power in Indian Ocean musical cultures. She also does ethnographic field work in East Timor where she analyzes urban music, the individual, and the transnational institution in one of the world’s newest nations. 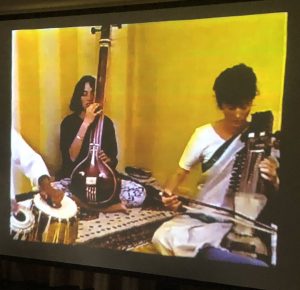 Julia presented a film called Poets in the Living Room– a documentary film of footage and interviews, created to profile the Qureshi Archive. It features a look into Drs. Saleem and Regula Qureshi and the music parties they held in their basement. These parties began almost as soon as the Qureshi’s arrived in Edmonton in the early 1960s, and these evenings of poetry and performance allowed the rapidly-growing South Asian community to begin to know itself. The film shows us a glimpse into these ephemeral moments, where community blended into family.

Next up, we had two film screenings from Terada Yoshitaka at the McConnell Public Library in Sydney.

Terada received his PhD from the University of Washington and is Professor of ethnomusicology in the Center for Cultural Resource Studies at the National Museum of Ethnology in Osaka, Japan. He has been interested in how music can let migrant communities express themselves and assert their rights in a host society that may not acknowledge their contributions. He conducted research on Japanese, Filipino and Sri Lankan communities in North America as well as Okinawan and Korean communities in Japan. Terada made several films on music-making of migrant communities and he shared two of these films with us in Sydney. 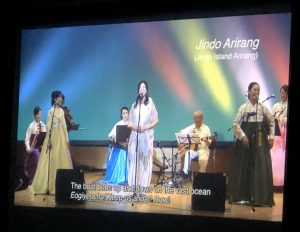 The first film we saw is called Crossing over the Arirang Pass: Zainichi Korean Music.

It focused on Koreans who migrated or who were forcefully relocated to Japan during its colonization of the Korean Peninsula (1919-45), and their descendants (known as Zainichi Koreans). The Zainichi Korean community in Japan has suffered multi-layered divisions. The title, “the Arirang Pass,” is a symbol of the hardships Zainichi Koreans have had to endure in their marginalization. The act of “crossing over” refers to this community’s difficult struggle to overcome it. The film showed us how performing songs about the Arirang Pass allows Zainichi Koreans to share their past and present struggles (among themselves and with others), connect generations, and create hope for the future. After the film, the audience had a discussion about cultural diplomacy.

The last film of the day was Drumming out a Message: Eisa and the Okinawan Diaspora in Japan. 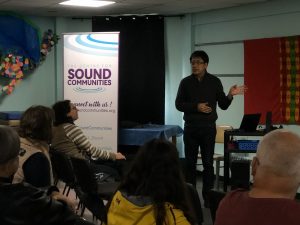 The film was about how Okinawans living in mainland Japan used music, dance, and drumming to create an outlet for self-expression. It focused on eisa, a form of dance traditionally performed in Okinawa during the summer bon festival. However in 1975, young Okinawans workers living in Osaka used this tradition to construct a positive identity in their geographical and cultural displacement.

The film tries to capture the voices of these young migrant workers from Okinawa and second-generation Okinawans. It shows how performing eisa counteracted the derogatory images of Okinawans in mainstream Japanese culture and also made these individuals more resistant to the adversity created by such images. In the discussion after the film, audience members learned more about the history of Okinawans in Japan and also gained some insight into the filmmaking process.