To start off the series of events for the Songs and Stories of Migration and Encounter Colloquium, we had a concert at the Holy Ghost Ukrainian Catholic Church in Whitney Pier. The concert featured on one of the world’s premier players of the bandura (Ukrainian lute-harp), Julian Kytasty. A singer, multi-instrumentalist and third-generation bandurist, he has performed and taught instrumental and choral music throughout the Americas and Europe. Born in Detroit, he has a BFA in Theory and Composition from Concordia University in Montreal. Mr. Kytasty is especially recognized for his expertise in epic songs and early bandura repertoire. As a performer, recording artist, composer, and band leader, he has redefined the possibilities of the bandura.

The concert was titled Immigrants, Exiles, and Cultural Missionaries: Bandura Music Outside Ukraine. 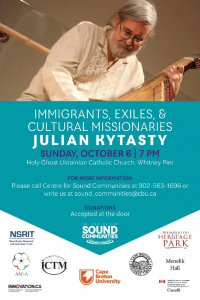 The bandura has been considered a national instrument in Ukraine. During the 20th century, the instrument was carried around the world by bandurists caught up in multiple waves of emigration. Some left to find a new home and a better future; others fled Ukraine as political exiles and wartime refugees. For each of these immigrant groups the bandura was a marker of identity and a way of expressing their deepest feelings about the place they left behind, the circumstances under which they left it, and the place they came to. In between songs, Julian taught us about these different moments of people leaving Ukraine and creating new homes elsewhere, and about the songs and stories they created. 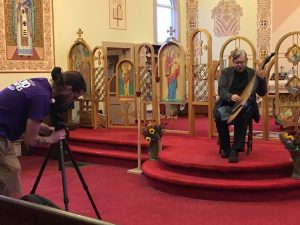 Julian started the concert by playing us some of traditional folk songs that would have been sung by blind singers in Ukraine, Kobzars. He told us about the history of these epic singers who sang stories of the people. 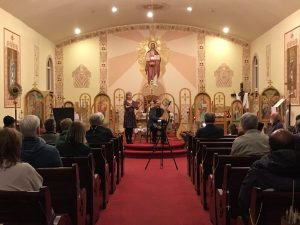 The concert programme focused primarily on the 20th century bandura players who left Ukraine and continued their work elsewhere.  Julian taught us about the war in Ukraine after the Russian Revolution and how this caused many prominent bandurists to leave Ukraine. The next large wave of Ukrainian emigrants was after the Second World War. Julian told us about the particular difficulties Ukraine faced during this war, struggling against both Nazi Germany and Stalin’s Soviet Union. We also learned about initiatives by 1960s Soviet Ukraine to get major cultural figures to return to Ukraine. 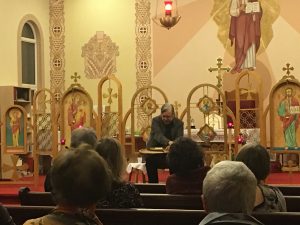 Throughout the concert, Julian performed songs by these emigré bandurists and described how they felt a deep sense of cultural mission: to preserve cultural content repressed in Soviet Ukraine, to continue developing the instrument in their new homelands, and to chronicle their own experience and that of their generation.

Julian ended the concert with bandura music that was very personal to him.  As a third-generation bandurist, Julian Kytasty has been part of this process of bringing the bandura from Ukraine to North America. He played some of the music that he inherited from his father, grandfather, and other members of his family. He also played some of his own creations, including a completely improvised piece dedicated to this day of our concert. 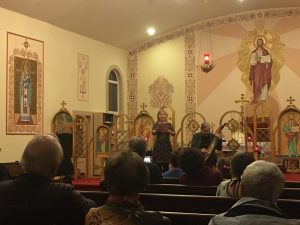 The Ukrainian songs and the sounds of the bandura reverberated beautifully throughout the Holy Ghost Ukrainian Catholic Church. It was a pleasure to learn about the songs and stories of Julian’s family and other immigrant bandurists, the instrumental music they brought with them, and the new music they made for their instrument outside of Ukraine. 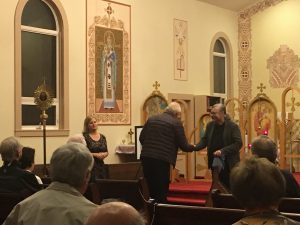