You are here: Home / About Julian 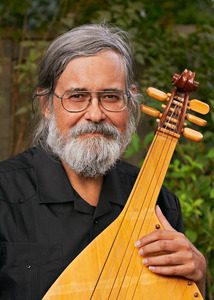 Julian Kytasty is one of the world’s premier players of the bandura (Ukrainian lute-harp), and the instrument’s leading North American exponent. A singer, multi-instrumentalist and third-generation bandurist, he has concertized and taught instrumental and choral music throughout the Americas and Europe. Born in Detroit, he has a BFA in Theory and Composition from Concordia University in Montreal.

Mr. Kytasty is especially recognized for his expertise in epic songs and early bandura repertoire. In 1989-1990 Kytasty was one of the first North American-born bandurists to tour Ukraine, performing over one hundred concerts. He has often returned to tour in Ukraine and in the summer of 2014 he traveled to sites associated with Taras Shevchenko’s life and poetry at the invitation of the Ministry of Culture of Ukraine’s Shevchenko Bicentennial Project. He played both formal concerts and on-site performances which were filmed for an upcoming documentary Slidamy Shevchenka (In Shevchenko’s Footsteps)

As a performer, recording artist, composer, and band leader, he has redefined the possibilities of the bandura. Mr. Kytasty is the Musical Director of New York Bandura and founder of Bandura Downtown, an innovative music series based in New York’s East Village that provides a home for creative explorations of traditional and contemporary sounds and themes. He has recorded and performed as a soloist, with the Canadian world music group Paris to Kyiv. He has also worked with musical innovators such as John Zorn and Derek Bailey, as well as cross-culturally with such artists as Wu Man, Klezmer revivalist Michael Alpert, and Mongolian master musician Battuvshin. These experiences have shaped his approach to composition as designing a musical space in which each individual voice and instrument can find room and inspiration to make its unique contribution.

Julian Kytasty has also composed music for theater, puppet theater, modern dance, and film, earning a Blizzard award for best film score for a National Film Board of Canada documentary, “My Father’s Village.” His music is featured in the new Ukrainian film The Guide, Ukraine’s submission to the 2015 Academy Awards. He created and performed original music score for Boardmore Theatre’s production Unity 1918 in the fall 2013.

Recent recordings include: Songs of Truth a solo survey of songs and instrumental music from the kobzar tradition (Cape Breton University, 2014), Nightsongs From a Neighboring Village, a duet program with Michael Alpert juxtaposing Ukrainian musical tradition with the music of Ukraine’s Jews (Oriente Musik, Berlin 2014; nominated for the German Recording Critics Best Album of the Year in two categories).