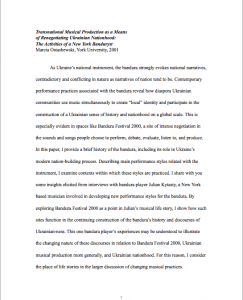 The two articles introduced below (written by Dr. Marcia Ostashewski) address the shifting representations of identity, nationalism, and gender as they relate to bandura performance. These aspects are evaluated in the context of two artist spotlights at the Bandura Festival held in Oakville, Ontario in March 2000, a conference-style event which, Ostashewski writes, acts as “a site of intense negotiation in the sounds and songs people choose to perform, debate, evaluate, listen to, and produce.”

The first article, “Transnational Musical Production as a Means of Renegotiating Ukrainian Nationhood: The Activities of a New York Banduryst” was presented at the Local Music/Global Connections conference hosted jointly by NYU and Columbia University in New York in 2001, and is the basis for forthcoming publications. The article highlights some of Julian Kytasty’s most significant bandura performances and experiences, and examines the ways in which “his musical practices force conceptualizations of Ukrainian nationhood into flux.” Ostashewski writes that Kytasty’s re-articulation of bandura style and technique challenges traditional understandings of authenticity. This re-articulation, which is produced through his contemporary performance practices, reflects the ways in which discourses of identity politics are constructed and re-created both locally and globally. (To access the full article, please click the document image to the left).

The second article, “Women Playing the Bandura: Challenging the Discourses of Nationalism”, published in Ethnologies (2001: vol. 23, no. 1), follows the musical contributions of American banduryst Nadia Tarnawska (a student of Julian Kytasty’s). It discusses her role in challenging discourses of Ukrainian nationhood and of “what is normally accepted as women’s repertoire” in bandura performance. The article explores how Tarnawska’s negotiation culturally implicates prescribed gender constructs in the normally “male-dominated bandura tradition” and considers how the bandura and its repertoire are continually being “retranslated through history.” (The full article may be accessed through your institutional library’s online database, or directly through WorldCat.)