You are here: Home / Night Songs From a Neighbouring Village 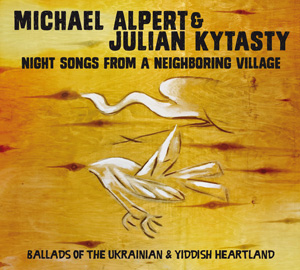 “Two men, two languages, some books, microphones. A fiddle, a guitar, an accordion, and, of course, some beautifully crafted banduras and flutes. Two musical traditions from an old world: Yiddish and Ukrainian.

Two musicians exploring the what-might-have-beens of these musical cultures left in fragments in the aftermath of the twentieth century totalitarian psychosis. Michael Alpert and Julian Kytasty are gatherers – at times wool-gathering – and on their long way they collected many pieces that they now bring together in this recording.

The album Night Songs From a Neighbouring Village discloses the inherited worlds of two artists who grew up as sons of immigrants from today’s Ukrainian territories to the United States. It opens up worlds of memory, tradition and loss; the constant, gnawing imaginings of lands and people left behind.

More than that, these worlds are brought together by the two artists. Thus, one can imagine alternate homelands, alternate histories – an alternate Ukraine, a different twentieth century – if you listen to the conversation of these two musical traditions, intertwining. This creates space for shared joys, pains and passions, stories and tales: shared history and imagined shared present. It evokes a sense of coming home, but to a land we have never seen, that may not exist beyond where the music can conjure it.” ~ Oriente Musik, 2014