The following are excerpts from a review of Black Sea Winds by Marcia Ostashewski, published by The Ukrainian Weekly (April 14, 2002, no. 15, vol. LXX): 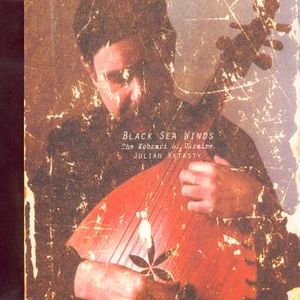 “‘Black Sea Winds: The Kobzari of Ukraine’ offers a surprisingly uncomplicated texture for sounds that are so very rich. This latest solo recording of bandurist Julian Kytasty, like all his music, has a grounded quality and directness where one normally comes across ethereal, harp-like sounds. The pieces on the CD draw largely upon a traditional and historical kobzar repertoire of ‘religious and moralistic songs [dumas], lively humorous songs and instrumental dance tunes.’”

“In a recent interview, Mr. Kytasty identified the greatest influence in his music and life as bandurist Zynovyi Shtokalko. Dr. Shtokalko, who died in New York in 1968, was a medical doctor, researcher, modernist and poet – ‘very 20th century,’ said Mr. Kytasty. ‘He showed us how to create new music out of the solo tradition, he took the old stuff and carried it way past what the blind players did.”

“Black Sea Winds, recorded in London by November Music, was inspired by Dr. Shtokalko’s ‘non-academic, non-museum type way’ of playing. This recording was mostly improvised, Mr. Kytasty told me – ‘to reproduce [the old kobzar music] is not to do it right; reproducing it note for note is ‘doing something’ but not doing music.’ Mr. Kytasty says he is ‘following through on what Shtokalko did, [playing music that has] a sense of being really traditional and yet breaking into modern sensibilities.’”

Black Sea Winds is unfortunately no longer available for purchase. The following are a selection of tracks from the album: