You are here: Home / About The Bandura

The history and physical development of the bandura is complex, and there is debate (into which we will not delve here) as to the classification and naming of various bandura types. We hope that the following will serve as an adequate, albeit brief, introduction to the instrument: 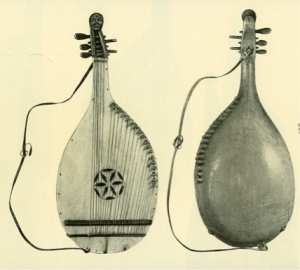 Hornjatkevyč, Andrij. “The Kobza and the Bandura: A Study in Similarities and Contrasts.” Folklorica 13.0 (2010).

The bandura is a plucked composite chordophone by the Hornbostel-Sachs classification system, and is similar in construction to the European lute. The instrument has a curved wooden back, and is asymmetrical, with its neck offset to the performer’s right. The neck houses the basy (bass strings), while the prystrunky (treble strings) are stretched vertically across the bandura’s body. The bandura is an unfretted instrument; both the basy and the prystrunky produce a set pitch when plucked. 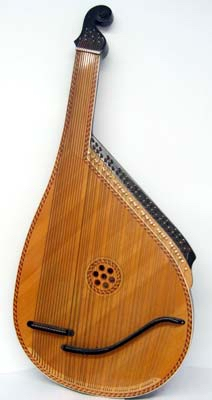 The tuning of the bandura also differs depending on the instrument’s construction: a given instrument may be diatonic or chromatic; its strings are tuned individually by turning wooden or metal pegs at either the top or the bottom of the instrument. Some banduras also have switch mechanisms which can be used to alter the instrument’s tuning chromatically during a performance. Additionally, the bandura may have one central sound hole, or several smaller holes in the middle or at the base of the instrument.

On the Songs of Truth album, Julian Kytasty plays a diatonic starosvits’ka (tradition or ‘old style’) bandura. The base of the bandura rests atop his thighs, while the back of the instrument leans on his upper body. He uses both his left and right hands to play the basy and the prystrunky.

For more information on the bandura and its development, please refer to the following resources, or contact us at marcia_ostashewski[at]cbu.ca and we will direct you to additional information: