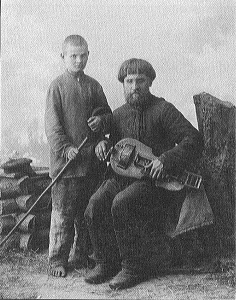 The Flood was introduced into the repertoire of North American bandura students by Hryhory Kytasty, who frequently taught it in a group setting. He used a choral arrangement by Mykola Leontovych (1879-1920), a composer best known for Schedryk/Carol of the Bells. Leontovych’s   arrangement of The Flood is very similar to the version found in Demutsky’s collection, which was the original source. Hryhory Kytasty added simple bandura parts. I created my solo version 30 years later, mostly from memory, adapting the accompaniment to the possibilities of the kobzar-style bandura.

As with many of the songs recorded here, only a few representative verses of a much longer text are performed. In 1988 two friends and I sang through the complete text of The Flood as it appears in Demutsky while riding in a tour van through a drought-stricken Saskatchewan summer. By the time we got to verse 20 or so, a deluge of Biblical proportions had descended. The experiment was not repeated.” ~ Julian Kytasty, 2015

(English translation by Julian Kytasty below)

The Lord spoke through His Holy Spirit
“Listen, Noah, open your ear,
Build an ark, Noah, build an ark!”

“I shall send down great waters
To destroy for all eternity
The tribe of Man, his cattle too.”

They fled their houses,
They ran for the hills,
There to hide, there to hide.

Then the evening star came out,
The dove returned with welcome news:
There is land, there is land!